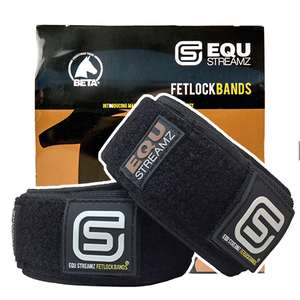 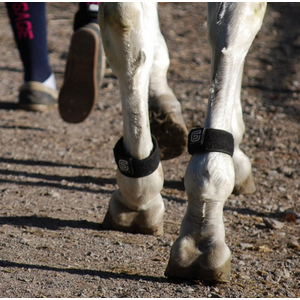 EQU StreamZ fetlock bands were developed in the UK and are now available in Canada. They provide a natural response to a variety of symptoms found with horses, introducing a new technique of magnetic therapy to the equine market. Unlike traditional magnet

EQU StreamZ horse bands ® introduce a new technique in how magnetism is deployed – ‘360º resonance technology’ – Magnetic therapy for your horse, with a difference!

StreamZ does not pulse, it spins! This unique process prevents an increase in temperature allowing the bands to be worn by the horse immediately after exercise and for long periods of time, including through turnout. Ideal after exercise, when recovering from an injury and for general wellbeing.

The neoprene design fits snuggly against around the horses leg and is recommended to be worn for a minimum of 8hrs per day, the longer the better!

Each horse pack contains a pair of adjustable bands (up to 35cm circumference). Wrap each band around the fetlock/hock and attach using the hook-and-loop material, leaving enough of a gap to push your little finger between the band and the horses skin. A continuous layer of StreamZ material then ‘gets to work’!

By joining the ‘StreamZ Family’ you’ll horse will be joining an illustrious bunch including World and Olympic Champions, international teams, leading charities and thousands of other customers across the world.

EQU StreamZ are with you, every step of the way.